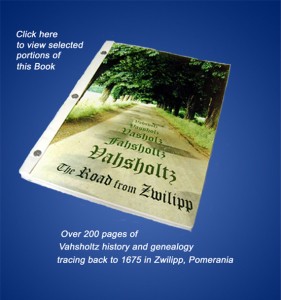 Featuring stories told by many members of
our Vahsholtz Family

This book is about the Vahsholz Family.  We’ve tried to get the facts, capture the spirit, and ignore the rumors, but it was quite a challenge.  We’ve gathered information from many sources over lots of years.

Melvina Hitzeman gets much of the credit because she and Louis compiled the first book of Vahsholtz history in 1977.  Melvina put untold hours into that book and it is the foundation of this one.  Melvina and many others have gathered additional data since that time.

In the mid 90’s, Madeline Brockmeier and Marge Vahsholtz independently set about entering the known data into computers.  In 2003 they met and pooled their efforts.  They spent endless hours chasing contradictions and missing links, and met many relatives who pitched in as they could.

You might ask why did they do all that work?  A good answer comes from Lulu Bates, who wrote to Amelia Wicki in 1977 and responded to that question, “I agree that it does take a lot of time and patience to get information on families and history.  But, what I have done, I have enjoyed and I find it very interesting.  It also give us a better insight of the trials and tribulations of our forefathers, their mode of living and things they had to deal with.”

Melvina, Madeline, Marge and Lulu have two things in common; they’re interested in family history and they have no Vahsholz blood in their veins.  Those of us who do, owe them a big vote of thanks.

All of us who worked on this book hope that you too will find it interesting and that it will give you better insights into the trials and tribulations of your ancestors.  Thanks too, to all those others who contributed to this book in so many ways.